This post is part of Raimifest @ Things That Don't Suck 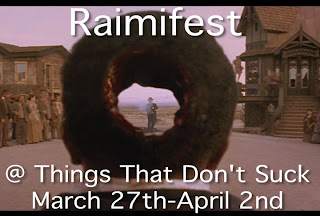 Have you seen the episode of Quantum Leap where Sam leaps into a rancher? It's a pretty crucial part of our cultural history, what with Sam inspiring Buddy Holly and all.  But it's also what I kept thinking of while watching this movie for the first time tonight.  There's a scene where the sweet science of calf roping is explained that has stuck with me for whatever reason.  It's said that the most important thing is that you pick a calf and follow it; it's apparently a novice mistake to let yourself get distracted and keep going after whichever one happens to be the closest.  I can't help but think that Sam Raimi could have learned a little something if he'd also leapt into a rancher before making this film.
I found myself wondering, before the movie began, what sort of movie Raimi was going to go for here.  Was he going to transplant his signature style and humor out of the cabin in the woods and into the old west?  Was this going to be an homage to the Spaghetti Westerns of the 60's and 70's?  Or given the star-studded cast was this to be a crowd-pleasing bid for mainstream appeal pre-Spider-Man?  I think any of those would have worked...I just wish he'd picked one. 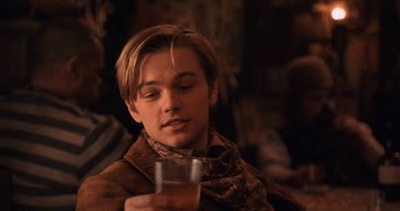 Nobody who was familiar with Raimi's work would fail to recognize this as his film.  All his directorial trademarks are here (but for the Bruce Campbell cameo that apparently was left on the cutting room floor):  there's over-the-top gore in the recurring visual motif of over-sized holes being shot through the gun-fighters, there's a couple of moments of Three Stooges-esque slapstick, and the whip-zooms around Leonardo DiCaprio leading into his first duel left me expecting him to pop on a chainsaw-hand.
There's also a few nods to Leone, although they're at best superficial.  Alan Silvestri's score is mostly forgettable, only drawing attention to itself during those moments where he is clearly aping Morricone.  The town is grimy enough that it looks more like the place that Eastwood would have spent his nights than the Duke.  And I suppose that Sharon Stone's character "Lady" is supposed to evoke the Man With No Name, but she does herself no favors by courting that comparison.
More than anything, this movie seems to want to be a mainstream Western a la The Unforgiven, released only three years earlier.  Raimi even brought in Gene Hackman for a pretty similar role.  Except where that movie had some real heft to it, this is all broad strokes.  Hackman's character was written as almost comically villainous; if he'd had a mustache, he'd have been twirling it.  Russell Crowe's ex-killer looking for redemption is equally one-dimensional.  Only DiCaprio's character seems like he might have a life outside of his scenes in the film. 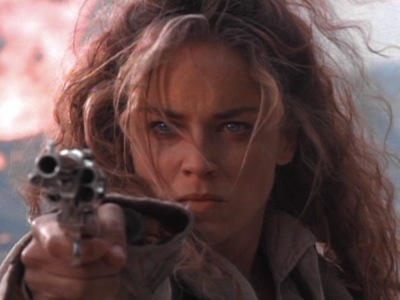 The real problem in this film, however, is Sharon Stone.  She has one good scene, alone with Hackman in his mansion, in which we actually get the sense of her as someone who's no killer by nature but driven to it by her need for revenge.  The entire rest of the movie her every note rings false.  The only satisfying ending for her performance would have been for it to turn out that her character was actually a tourist visiting Westworld.
It may be that the movie's premise doomed it from the start.  Telling the story of a "quickdraw contest" means that almost by definition you're going to have a series of exciting duels wedged in between scenes of, well...waiting for the next duel.  And unfortunately that's exactly what Raimi gives us.  The duels are, to a one, well-staged, dynamic and exciting, but the film drags to a halt every time the gunfighters holster their weapons and return indoors for their scheduled moping about the state of their souls.


It's really something of a shock to me to find myself writing a negative review of a Sam Raimi film.  I've seen every movie he's made except For the Love of the Game and enjoyed all the rest immensely.  (Hell, this is the guy who managed to get a good performance out of Keanu Reeves.)   I'd have loved to have seen him approach the Old West like the Coens have, where he'd really put his stamp on it and emphasized the grotesqueries and the out-sized.  Or a straight-up homage to Leone could have worked as well.  But this is clearly a transitional film, Raimi's first real attempt to move out of the low-budget world he'd been working in and go Hollywood.  We all know how successful he'd eventually be in that respect, but unfortunately this first step was a bit of a stumble.
Posted by Apronikoff at 12:01 AM

Allex Crumbley has a degree in medieval literature, but doesn't use it. In general she believes that film, like fine wine, gets better with age. Look for her take on this year's top films, coming in 2056! Allex will watch most anything made before 1955, but has particular interest in silent film and Golden Age Hollywood musicals.